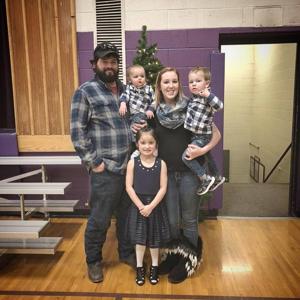 Shannon Volker was diagnosed in 2015 with medullary thyroid cancer caused by the RET gene mutation and had her thyroid removed.

Since her cancer had not spread to her lymph nodes, her prognosis is good, but the RET gene mutation is hereditary, and therefore has the potential to impact her sons Keyton and Kylenn.

During the teen years is when screening for the RET mutation usually takes place, but Shannon says that a Facebook group she is part of encouraged early testing and intervention.

Tests revealed elevated levels in Keyten, now two-years-old, of the hormone produced by the thyroid, and it was decided as a precaution that his thyroid should be removed. When the pathology results were delivered, two cancerous spots had been detected on his thyroid, but again, since it had not spread outside the thyroid, his prognosis is good.

One-year-old Kylenn was tested in September, and he also had elevated hormone levels. “We have to go to Mayo in Rochester for tests and consults with doctors in January, and will plan for surgery then,” said Shannon.

The family is waiting on pre-approval from their health insurance. Several bake sale fundraisers have been held to cover travel expenses and other costs.

Since they have both had their thyroid removed, Shannon and Keyten take hormone replacement daily. “Keyten will have blood tests every three months to make sure his medication is where it needs to be.”

No Elective Thyroid Surgery Due to Pandemic: Try Thyroid RF Instead Now