5. You had the biopsy and it was suspicious. Before any surgery get another opinion. There are cancer marker tests that can be done on your slides from the initial biopsy, or collected from a repeat biopsy to help determine if the surgery is needed.

6. Some cancer markers (RAS) are associated with a single follicular cell carcinoma and usually can be treated with less dangerous surgery of lobectomy. BRAF and RET-PTC with papillary thyroid cancers which may need a total.

7. Even recurrent papillary thyroid cancer locally in neck lymph nodes after first neck dissection can be treated by non-invasive PEI ( ethanol ablation). This saves the patient another hospital admission for another neck dissection with all the risks and pain a suffering.

8. PEI is also the treatment of choice for thyroid and parathyroid cysts. There is no need for a thyroid surgery with this type thyroid cystic nodule with >50-60% cyst fluid. Refuse surgery until you have an evaluation to see if this is right for you. 15 minute treatment as outpatient or hospitalization, surgery and recovery.

2 cyst fluids from a thyroid cysts.

Bottom clear fluid was from a parathyroid cyst.

Benign thyroid nodules big enough to cause symptoms were usually referred for surgery.However, in the last 10 years Radiofrequency ablation RFA and recently high intensity focused ultrasound HIFU have been used instead of surgery. Before getting that surgery bed in the hospital get an evaluation for one of these non-invasive treatments. At present after my evaluation you need to spend 2 days in Europe or Korea to have RFA or HIFU. This is still less expensive and less morbidity that a hospitalization for thyroid surgery.

Ideal nodule RFA and HIFU is a micro-cyst spongiform nodule. 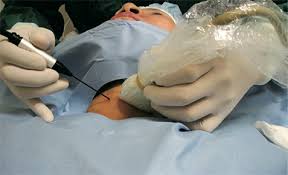 HIFU for thyroid nodules. There is no probe to stick in the nodule like RFA and ethanol.The probe just sits on the skin. Truly non-invasive.

HIFU centers in France,Germany,Italy and Asia. A referral from me gets you a 2 day in and out 20-45 minute HIFU tratment and back  to the USA for my followup. Call Matt 310-393-8860 for details.
New method is microwave ablation of thyroid nodules MWA.
TWo US beams cross at focal point and the heat from movement of billions of water molecules destroys the nodules cells.

Similar to RFA it kills a cigar shaped  1 cm area at a time so overlapping fields need to treated area.

Injecting numbing medicine on the capsule.

Microwaves use an antenna inserted into the nodule

Microbubbles are seen in the areas of destruction of the nodule cells.

Santa Monica Thyroid Center is the one stop shop of all things thyroid ablation interventional. In house Ethanol ablation cysts and thyroid cancer lymoh nodes and a referral evaluation service for RFA, HIFU and soon for MWA. Matt is the one to talk to.He is my thyroid sonographer. Call Matt 310-393-8860 .We do 1-2 day total evaluations needed before being a candidate for Ablation centers in Europe and Korea.
Ancient Turkish painting of barbaric  goiter surgery. Modern surgery is better but complications are still too high when a low volume surgeon does the surgery < 25 total thyroidectomies per year.